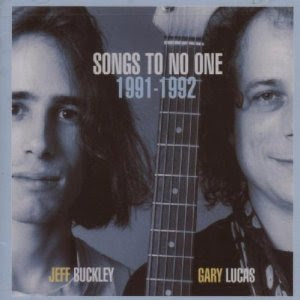 Rehearsal tapes, live soundboard captures, live broadcast tapes... these with any other musicians might be second thoughts, "also did this," leftovers. With artists the caliber of Jeff Buckley and Gary Lucas, Songs to No One, 1991-1992 (Evolver-Knitting Factory Records EVL 2008-2) that is so much not the case. Some are duets with the two, some involve the entire Gods and Monsters band, all are supercharged evidence of an incredibly fruitful union that we can now only appreciate on tape with Jeff's tragic passing. While it lasted though it was the best sort of collaboration, each bringing to the music something that completed what the other put forward. Jeff's rangy, dramatic, lucidly moody vocals and compositional elements; Gary's orchestral psychedelics, inimitable guitar sounds and musico-structural wisdom.

I hesitate to wax hyperbolic unless it is warranted. In this case it is. This is a classic, folks. It has all the makings of it. Instrumental profundity, vocal perfection, songs that don't go away but haunt you long after every listen. Jeff was a haunting, haunted cat. Gary was his best foil, grounding and spacing the song format with keen ears and eminently appropriate guitaristic counterpoint that equally haunts. The combination is rather uncanny. But do not take my word for it.

Singers, guitarists, avid listeners take note. THIS is an album you need to absorb. I will leave it at that.
Posted by Grego Applegate Edwards at 4:53 AM