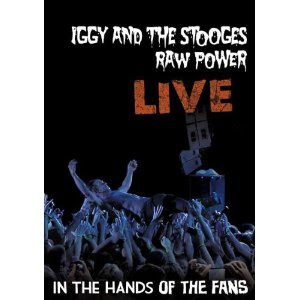 Iggy Pop and the Stooges did a live concert in Monticello, NY last September, 2010. They featured supercharged renditions of songs from their influential album Raw Power and a gathering of well-known numbers from previous albums. The CD that came out from that concert was reviewed on these pages (see May 27th posting).

Now a DVD of the gig is out. The total package is the result of a contest open to all Stooges fans, to make a video explaining why they would be a best choice to videotape the concert and interview the Stooges afterwards. A number of fans won and the result is now fully available in the DVD Iggy and the Stooges, Raw Power Live: In the Hands of the Fans (MVD Visual 52340). It shows you the zoo-like madness of Iggy and the audience interacting, the Stooges' security squad pulling people off the stage who manage to get up there to make themselves visibly nutty, the security squad repeatedly getting Iggy back up on stage after the audience has pulled him down on top of them while the music manically blasts away, among other things. The six or so contest winners get the show from many angles and there is a constant cut editing style that gives you the excitement but also doesn't give you a lot of footage where all the band members are facing you on the screen. But it's in realm of a cinema realism, a what-it's-like-to-be-in-the-audience feel.

The interview footage that follows has its ups and downs but basically it is rather insightful at times, especially with what Iggy has to say, who turns out to be articulate about it all.

The music is loud and strong, as on the CD.

Stooges fans will love it. Those not quite in that camp will certainly get a Stooge-eye view of what rock is about. And the band does NOT sound dated. Iggy is a vocalist who does a lot more than scream and shout, though of course he does that. That alone is something. Why are the Stooges important? What do you think, eh? The DVD gives you an idea of what that means. So it's worth pursuing if you are up for it.
Posted by Grego Applegate Edwards at 4:51 AM