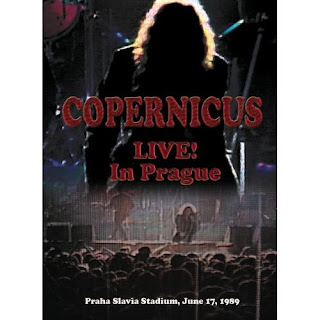 Copernicus, self-styled prophet, ranter, anarchic street philosoph and sometime rocker was on a roll in 1989. He was getting attention. So much so that he was able to tour Eastern Europe, filling large venues in the major cities and putting on a dynamic stage show with rant, gyrations and psychedelic-new wave band backing. As you can see from the recently released DVD Live! In Prague (Nevermore NDVD01), an arena show from June 17, 1989, live Copernicus was an experience!

The band is loud and adventurous, laying out spacy soundscapes and highly charged, high-voltage feedback laced rock backdrops as Copernicus launches energetic volleys of subversive harangue. "You are bacteria...I am bacteria...the Pope is bacteria. . ." he shouts. We are are descended from bacteria. We ARE that.

The drummer is good, the audience engaged and Copernicus is in his element.

Anyone who digs Copernicus will find this a revelation. Anyone not is in for a ride. It's heavy. Well done. This is a document in the musical-cultural history of the period. And it's great fun if you are primed for it!
Posted by Grego Applegate Edwards at 4:30 AM