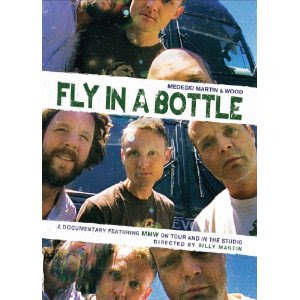 Medeski, Martin and Wood have managed to garner a pretty wide popularity in the last 20 years by creating their own personal blend of funk rock and original, more avant elements in an electric matrix. John Medeski plays organ and keyboards with a special quirky, but highly musical approach to it all. Drummer Billy Martin and bassist Chris Wood have carved out their own roles in the band too. Together they make some advanced compositional funk-rock that in some ways carries on the open stance of the original Tony Williams Lifetime. Other times they simply intuit a new sort of rock-jazz hybrid. Still other times they are in an "accessible" mode.

Billy Martin has created an interesting full-length film of the band in the studio, live, on the road and hanging out. It's called Fly in A Bottle and is now on DVD (MRI).

You experience a birds-eye view of the band discussing arrangements, getting things right in the studio, goofing around and playing some of their special blend of music. It's going to appeal very much to MMW fans and it is entertaining and not uninteresting regardless. There are three music videos included as a bonus.
Posted by Grego Applegate Edwards at 5:07 AM