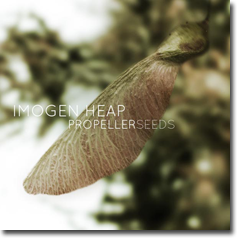 Imogen Heap has shown herself to be someone who doesn't take what a singer-songwriter is supposed to do for granted. She is, to mangle and corrupt the cliche, a thinking AND FEELING person's musical artist. The spiky quality of her first album, the supremely lyrical and rhythmically moving Frou Frou, some of the sublime vocal soundscapes of recent albums, her tour where she invited audiences at each stop to name musical parameters and proceeded to create spontaneously a song on the spot (see reviews on this blog), the results of which were released as downloads and the proceeds donated to various worthy charities, she has always done things a little differently.

She's working on a new album, cut-by-cut. As she does so she offers expanded singles downloads of the songs at www.imogenheap.com. There are four so far but I've been checking out the first two.

The first, "Lifeline" is a product once again of on-line input from her fans about what should go into it. The results are very Imogenesque, with a vocal inimitability and a lyrical bent. The download includes an unplugged version from the release party.

The second, "Propeller Seeds" is more ambitious. It's a kind of video for the ears, a story about an emotional-experiential slice of Imogen's rich imaginative life. It's haunting and sonically fascinating. The download includes software to install so that, when listening with earphones, you get a kind of 3-D effect. I didn't try it yet. What counts is that the beauty of her vocalisms are matched by some musically extended, electronically-symphonic sounds that go way beyond what is expected from a "popular" artist today--vis-a-vis some of those formula pop things out there now.

A drummer friend of mine yesterday alluded to the idea that her music has lost some of the rhythmical thrust she has had, especially on Frou Frou. He's right, there. I do miss that and hope maybe she can bring it back a bit more. As it is though she is a beautiful soul, a wonderful voice, a songwriter of great originality. So there we are. She to me is an important artist for the time in which we live, someone that makes me think that great music can be created in the square of the marketplace, even today.
Posted by Grego Applegate Edwards at 6:09 AM