The Galactic Cowboy Orchestra, All Out of Peaches: Prog-Fuze with A Southern Tinge 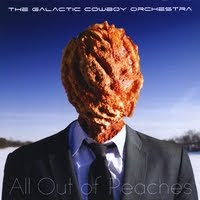 A little bit like the Dixie Dregs before them, The Galactic Cowboy Orchestra play a blend of prog-fuze that brings a shade of southern country comfort into the mix on occasion. That has something to do with the guitar-fiddle two-tandem of Dan Neale and Lisi Wright, who both have a little country in their sound, and both have no little command of how to bring that into the instrumental prog-jam fold the band resides in. They also solo with some authority. John Wright plays a very solid roto-sounding bass, he can take an interesting solo in the rock zone and generally has a good presence and out-front quality not always heard in this sort of band. Mark O'Day plies a respectable set of advanced rock drums and gives out with a driving sound much of the time. All this can be heard on their second opus, All Out of Peaches (New Folk 2302).

Together they run vigorously through a set of originals that have some of the busy qualities of the genre without sounding like they are aping other bands. There's a little odd-metered frontier-crossing and melodic arrangements that follow a somewhat original curve.

I do especially like what Lisi Wright does on fiddle, a kind of Richard Green sweetness and fleetness within the fiddle tradition and soaring solo lines, but everybody gets some moments to put their sound across. And as an all-member effort they do get a very interesting blend. Not routine fare by any means, this music will give devotees to the genre a new voice to listen to. They may not always get a hard edge to the sound (if that sort of thing matters to you), but there is real musicianship going here that one has to respect.
Posted by Grego Applegate Edwards at 4:29 AM