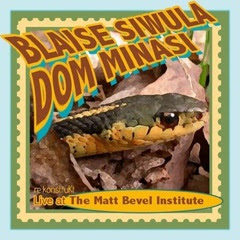 Both Blaise Siwula and Dom Minasi are central figures today on the New York avant improvisational scene. So it is most fitting that they got together for a series of duets, Live at the Matt Bevel Institute (re:konstruKt download release).

It's the virtuoso out saxophony of Blaise and the guitar innovations of Dom with both freedom and a strong compositional element that brings it all together.

The point though, is that this is a bit different. Each has a particular sound, niche and approach that mesh excellently together for these performances. They are listening closely to each other. And the compositions magnify that interactive chemistry as they set up the improvisations that revolve around them.

As this point in their careers they have realized their own personal voices, a way of sounding and a way of playing that a familiar and attentive ear would readily identify in a blindfold test. They give an excellent performance and thankfully it was captured well on disk. Get info on downloading the set at http://www.rekonstrukt.com/re_konstrukt/029.html. It's not like anything else. That in itself is a reason to check it out!

Posted by Grego Applegate Edwards at 5:28 AM