Elysian Fields, Queen of the Meadow, 2000 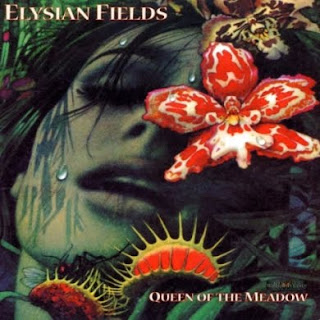 Elysian Fields, a favorite band of mine, recorded their fourth album (though one was not released) in 2000, Queen of the Meadow (JetSet TWA 33). It has been reissued, as I understand it, on another label, but I have a used copy of the first edition so that's the cover I post here. The main creative forces behind the band are Jennifer Charles, vocals and co-composer, and Oren Blodoe, guitars and co-composer.

The music is darkly playful and Jennifer's vocals are inimitable. This particular album has some very strong songs and nice arrangements. I would say it's one of the best.

My wife, hearing this playing, queried "Who's that? I like it, especially the vocals. It all reminds me of the music from 'Twin Peaks'." Well I don't disagree, though I've come to appreciate the originality to be had here and the similarity to "Peaks" has something to do with the new noir dark-light sensibility they both have in common.

Well and so we go. This one should not be missed. I've already reviewed a number of their disks on these pages so I will not prattle on. It's a good go!!
Posted by Grego Applegate Edwards at 5:41 AM