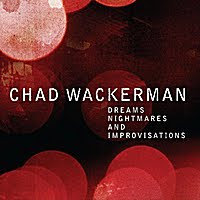 Chad Wackerman was perhaps the most talented of all the drummers to grace the stage in Frank Zappa's bands. As he has matured his playing and his group concept have blossomed, so that if he no longer so much wears his prodigious technique on his sleeve, he makes music that is as astoundingly virtuostic as it is challenging and interesting.

For the new Dreams, Nightmares and Improvisations (Chad Wackerman CD-5) he gets together with long-associated colleagues Allan Holdsworth, Jim Cox and Jimmy Johnson on guitar, keys and bass, respectively. Their many years spent together and some roadwork that Chad and Allan did recently, working on spontaneous composition/free improvisation, has given birth to a vibrant ambient album of music half-composed, half-jammed. The two halfs of the puzzle fit together without seams showing, and the results are very good; excellent in fact.

Chad sounds beautiful, a percussion orchestra unto himself. Allan plays the guitar in his own instantly identifiable way and as usual has a wealth of ideas. The translation of his playing to the synthaxe on some cuts gives him an expanded sound. As much as I tend to dislike the digital guitar interface, Allan's playing with it satisfies me the most--partly because the striking nature of his lines transcends the sound of the output, and also because the compressed nature of his guitar sound is not as far away from the synthaxe sound as some other players' guitar sounds can be. So there is more compatibility there in the first place. Similarly Jim Cox's synth work is so compatible with Holdsworth's style it is sometimes difficult at first to mark where Allan leaves off and Jim comes in--at those points where Allan is on the synthaxe. Jimmy Johnson has chops and excellent taste and so adds much to the session.

It's a driving yet ambient fusion style that these four have worked out by now. The monstrously accomplished Wackerman and Holdsworth never sounded better together. This one will curl your toes!
Posted by Grego Applegate Edwards at 5:09 AM