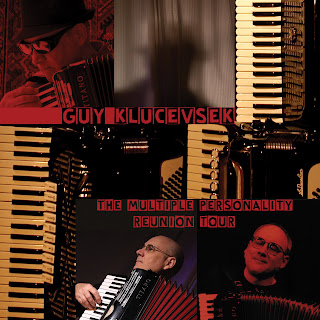 And the title is more than just funny. It fits. He's brought together on this album virtually all the strands of musical culture he's been immersed in. It's world music. It's Baltic-Eastern European music. It's accordion music. It's a kind of fusion, in it's own distinctive way. It's noteful. It has those wonderful odd-metered grooves. And it's just plain good music.

The album features Klucevsek in a variety of small-to-mid-sized band configurations. They travel a wide arc though the ins and outs of Guy's musical concept.

In the end you get some pretty wild and wonderful, woolly and well-honed music that you are unlikely to hear quite like this anywhere else...unless it's on Guy's next album.

Dig on this one!

Posted by Grego Applegate Edwards at 9:33 AM