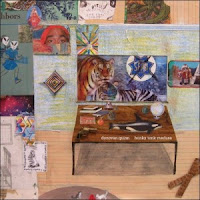 Donovan Quinn. His quirky lyrics. His laconic laid-back vocals. His retro-modern rock song output. That's what his new album Honky Tonk Medusa (Northern-Spy 019) is about. It's contemporary, now, without being adonoidonal. (I refer to those vocalists that sound sort of young and cute while singing about hard-as-nails shyte that belies the sound of their wimpy little voices. You know the sort. And in their videos they are guaranteed to play their guitars in ridiculous postures, poses only possible if you are playing three bar chords with faux abandon!) No. It's new rock without the pretense. Underproduced. The band is doing what it does without any sort of slickness. Slickness would have messed it up. So that's cool.

So I listened once, said "OK," then kept listening until it started to gell in my head. This has trajectory, it goes where it does in a nicely underground-ish way.

I like it. He's got his thing going here and it's going well.
Posted by Grego Applegate Edwards at 5:13 AM