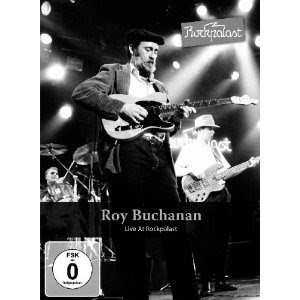 Roy Buchanan has always been somewhat of an enigma. Though he is revered by many guitar-wielding cognoscenti, widespread recognition among the general public has alluded him. This was partly by choice, partly by circumstances. The DVD Live at Rockpalast (MIG 90397) gives you an hour of him and his group appearing in Hamburg for the Rockpalast TV show several years before his death.

He plays his guitar. There is a total lack of pretense. No gyrations or gimmicks. The band plays a set of blues, surf and rockers and he shows you what makes him special. It's him and his Telecaster, a moderate-sized amp with a bit of reverb, his band, and that's it. Oh and his vocals. They were "band" vocals. Old school.

What's nice about this video is that you get to see him in action. There is a special set of techniques he perfected, the staccato harmonic-plectrum hits, the envelopes of sound, the picking, all that he was you can hear and see him doing. And that's pretty cool both if you are a guitarist or if you just love the music.

It's no nonsense, the sound has a few glitches but is generally very good, and there you have it. You'll come away from viewing this one with a good sense of who Roy was. A player!!
Posted by Grego Applegate Edwards at 6:21 AM