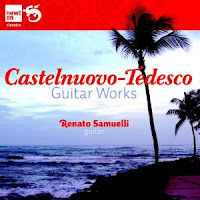 Castelnuovo-Tedesco (1895-1968) was encouraged in his writing of solo guitar pieces by the grand master Segovia. It is to Maestro Segovia that we owe many of the first recordings of these works and he was instrumental in establishing C-T's guitar compositions as mainstays in the contemporary repertoire.

On the current disk at hand, Renato Samuelli's Castelnuevo-Tedesco's Guitar Works (Newton Classics 8802106), Samuelli pairs the relatively under-recorded with some perennials, the moderately difficult with virtuoso show pieces, in a program that gives you a fairly full gaze at how C-T went about the business of composing for the solo classical guitar. The 16 examples from his "Notes from Notebook I,II" show how student pieces of moderate difficulty can also have the charm of the colloquial and a place in the classical guitar tradition.

The "Tonadilla" and the "Capriccio Diabolico", on the other hand, give you the fully fleshed-out composer of brilliance, the gifted professional writing for the guitar master.

Together a picture emerges of Castelnuevo-Tedesco the melodist, the composer who could coax magic from the gut/nylon strings, a lyrical architect of many moods. Samuelli handles the very different works adroitly, with subtle touch and judicious expression. This is not all of C-T's output for the solo guitar and it does not include all of his best, but it is a program that encompasses the full spectrum of the composer's oeuvre, nicely played.
Posted by Grego Applegate Edwards at 5:00 AM