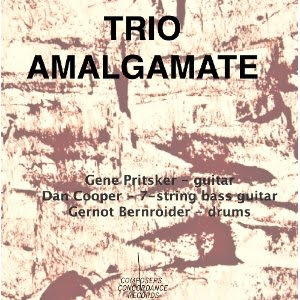 Composer-guitarist Gene Pritsker has been no stranger to these blogs. He has assimilated and made his own a wide scope of musical influences to create personally distinctive contemporary music always worthwhile to hear.

The newest offering is a prog-fuse power outfit Trio Amalgamate (Composers Concordance 011), which puts Gene in the guitar chair and joins him with Dan Cooper on 7-string bass, Gernot Bernroider on drums, and a cameo vocal appearance from Chanda Rule.

This is the composed and improvised, modern adventure-side of fusion. There are some very compelling compositional frameworks by Gene, and also by Gernot and Dan as well. "Weeping," which is Pritzker's adaptation of a theme by Mozart for the trio and Chandra on vocals, is the one piece that doesn't exactly go in the fusion mold, at least in its head melody, but it's very Pritzker-esque!

Everyone sounds good on this one. It's less about chopmeistering and more about making music, though there is no absence of technique.

It's a different take on the trio electrique. You want different, this will get that for you!

Posted by Grego Applegate Edwards at 6:18 AM