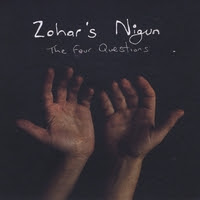 What is the world? We know literally of course. But "World Music" is what exactly? It's the world but maybe not your world. Or maybe it is. It's non-WASP music? Usually, yes. It's one of those categories we get stuck with in music but it has some utility. Today we have a quartet that plays music with a Jewish tinge, music with a tonality and phrasing not expressly Western (read WASP-ern?) but nowadays of course very much a part of the "West" as is the African-American strain of music, or, for that matter, to a much less extent, the influence of the Shakers.

Jewish music and Jewish life are of course very much alive in the States and the broader culture has been much enriched by that. So this is a part of a musical tradition that remains active and constantly moving forward while keeping traditions as well. Its influence and presence is thriving in the world I occupy, centered around New York City as I am.

So the music of the quartet Zohar's Nigun, specifically the album The Four Questions (Rectify Records), does not sound exotic to me. It does sound very good. The quartet taps into traditional Jewish melody and dance and combines that with jazz. It's not Klezmer. It is thoroughly contemporary in the way it commingles the elements together. It even gets avant now and again.

The quartet: Daniel Weltlinger on violin, Daniel Pliner on piano, Simon Milman on acoustic bass, and Alon Ilsar at the drums. Pliner's piano playing shows a thorough jazz schooling and he voices and does solo runs that make for an excellent sort of synthesis. Daniel Weltlinger's violin has a very direct Jewishness to it and also classical training. He is a phenomena, surely. And he sounds wonderful.

The rhythm section gets right where they need to be with old dance forms and jazz today combined.

It is music of much interest. There are some beautiful treatments of themes, getting an avant aspect into it all, a new music aspect, a larger encompassing of elements than would be expected if this was according to a formula.

I find it quite moving and heartily embrace it. Anyone who finds traditional Jewish and modern improvisational strains a welcome mix will no doubt feel as I do after listening a few times. I do not doubt. And if you have no idea what such a combination could be like, get a copy and experiment. It's good for you!