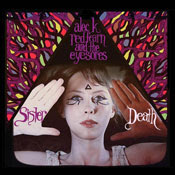 When you join bluesiness, avant psychedelic rock, folk rock and some kind of Goth in the spooki-est morbid-macabre way, you have something like what Alec K. Redfearn and the Eyesores give you on their album Sister Death (Cuneiform). This is a band that is so much of a piece it doesn't help much to say "it's a little like this" and "it's a little like that" because they aren't.

Alec sings and there's a female singer, too. And that works well because they both can sing. There is a kind of universal folk strain going on here, from all over the place, often taking on a minor key. But I hear everything there from Ireland to the Balkins by way of Transylvania and beyond. There's accordion in good measure, often electrified and altered. And keys in general make for distinctive ambiance throughout.

What else? The arrangements are worth the visit alone. They are very quirky and original. The songs come together as songs, dark and foreboding at times, rocking oddly at others.

This is one-of-a-kind music. You will do well with this if you are suited toward the corners of the musical universe, which most of my readers tend to pre-select themselves for. And if you like that spooky thing like I do.

Posted by Grego Applegate Edwards at 9:22 AM