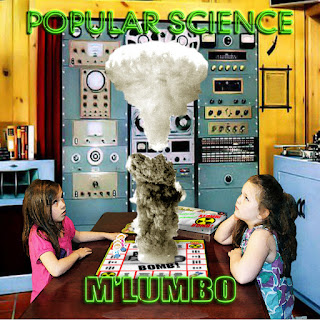 The past never disappears from the horizon. Sure, some aspects are cloaked, forgotten, still exercising indirect influence. Others are part of the present and future in the active sense....transformed in various ways, part of the discourse and common property of peoples in the course of their lives.

The group M'Lumbo makes excellent creative use of the past in their mid-sized outfit. Their latest, Popular Science (Pursuance 05) is a double CD, one disk made in the studio, one live at Joe's Pub in NYC. The studio disk presents Space Age remakes of popular culture masterpieces like "Beat It," "Theme from Hawaii Five-O," "The Peter Gunn Theme," "Rock Around the Clock," and so forth. M'Lumbo combine a small big-band-ish jazz-rock unit that is tight and driving with a wall of psychedelia--crazily mixed samples of pop-culture past--cartoon dialog, training films, commercials, radio broadcasts, anything and everything to put in the mix with an eye to incongruity and the sense of the unfamiliar-familiar as past, the transformation of the deadpan and the comic to one great oriental rug of meaningless meaning.

And the total matrix ends up being a comment on how the past invades the present, seemingly alien yet also familiar. It's in the end a noir psychedelia contrasting with hard hitting jazz rock. The title Popular Science is apt, referencing a magazine of the '50s-'60s that disseminated a street-level fascination with the technical aspects of modernity. And this is all about how modernity as lived inside in the '50s through today has taken on impossibly archaic qualities, of nostalgia, yes, but as a promised future that has passed, that has left us with a future-in-the-past.

So you get wall-of-sound collages, as in previous albums, and you get some serious music too. Saxophonist Jane Ira Bloom and guitarist Gary Lucas are the special guests for both the studio and live sets, and Page Hamilton of Helmet on guitar for the studio set, and they all emerge from the mix from time-to-time with brilliance.

The live set, hard as it no doubt was, manages to replicate in person the complex sample and band tapestry. Robert Jordan Ray Flateau, a driving force behind the band's approach, keyboardist and sample master, divides his duties in the live setting, giving some of the sample manipulation to another auxiliary member. And it works. Understandably the live set returns to some of the music from the previous two albums with a new matrix or immediacy and some new material as well.

This is sometimes hilarious in its juxtapositions, always evocative in the end totality, and a very new take on how a band can blend freedom with tight arrangements, anarchy of means, and some excellent soloing. Page Hamilton, Gary Lucas and Jane Ira Bloom get to shine with brilliance, but the total gestalt is entirely M'Lumbo's and they are one-of-a-kind.

M'Lumbo have done it again. You may hate it, you may love it, but it is not recommended that you ignore it--or them. They are sound arteests of the impossible combinations, avant behinds that jump ahead by making past pastiche a new futurism. And they are funny-serious, good god are they funny-serious!