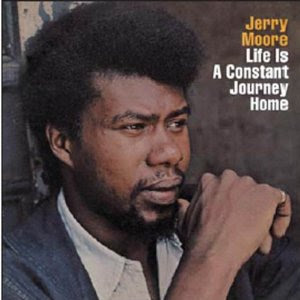 I missed this one by a mile when it first came out. So I am glad to be catching up with it now: Jerry Moore's Life is a Constant Journey Home (ESP 1061). It appeared in stores for a time in the late '60s, I am assuming, and it has a kind of folk-rock-commitment lyric ambiance that sounds nothing like the music of the late Richie Havens (RIP) but has a similar thrust.

It has a rock band loosely weaving in and out of the Moore vocals in the manner of a mid-period Tim Buckley or early Van Morrison. A young Eric Gale has some very good moments on guitar.

It has relevance to the era and is a very interesting listen. It may not be a masterpiece, but will certainly appeal to students of the era, as lived or discovered years later.