Thurston Moore & Loren Connors, The Only Way to Go Is Straight Through 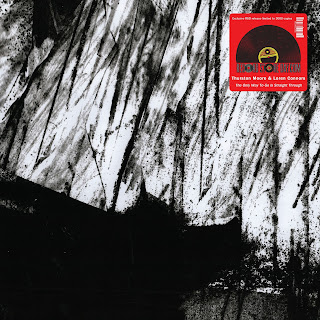 Before I go into describing the music on the album at hand I should first say that this was/is an extremely limited edition release--a vinyl LP available only in physical record stores. From what I understand this was made available to select stores on Record Store Day last month. You may have difficulty finding a copy, in other words. . .

That having been said, what we are talking about is an electric guitar duet between Thurston Moore and Loren Connors. The album is entitled The Only Way to Go Is Straight Through (Northern Spy LP). Moore, most readers will know, was a key founder of Sonic Youth who has since gone on to new projects. Loren Connors is an avant blues and otherwise musician who has been involved in a number of associations and has assumed a kind of legendary status out there.

The two crank it up for two sides of feedback, droning bends, scratchings, etchings, melodic and anti-melodic expression, and general psychedelic mayhem. The two segments were recorded live, side one at The Stone in Manhattan, side two at Public Assembly in Brooklyn.

There is good pacing and variety to be had here, for those accustomed to the more noisy a-temporal sort of avant rock out there. It is a very good set of jams. Good luck finding it. Your favorite cool record store might have a copy left?