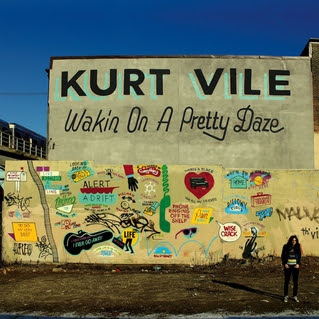 An artist who has some greatness in him (or her) manages to recreate his creative self over time, from project to project. At this point I feel comfortable saying that about Kurt Vile. His new one, Wakin On A Pretty Daze (Matador CD or special 2-LP version available at physical record stores only), has a re-creative quality. Kurt is back with a strong set of songs, well played, plenty of looseness when he wants it but hard hitting, one good thing after another.

The thing about Kurt Vile is he sounds like himself and his songs have definite twists that are all his. The vocals are deceptively laconic, guitar work excellent, and he writes songs that hang together as songs.

Wakin On A Pretty Daze takes it another step for the songs--they are strong. The lyrics have something to say and he can get some creative rock jamming going, which he does, especially on the 2-LP version.

He's become a real-deal rocker of this millennium, and this album clinches it for me. Should I say more? Listen to this one closely and it bears all the rewards such music was meant to convey!