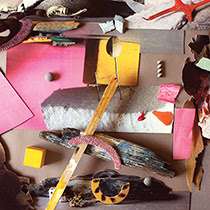 OK, then. Here I am at 3:29 AM on a Tuesday morning. So why am I awake? I would like to say it's because The Trusted Language, (Saddle Creek LP/CD LBJ-179) the second album by UUVVWWZ, is so goddog interesting that I couldn't sleep. The reality is somewhat more mundane. It wasn't the band, though I feel strongly about this album. I am just awake, is all.

Since I am though, I could think of nothing that would keep my lids pried open more aptly than this four-tet. They hail from Lincoln, Nebraska, where perhaps the daily round there was such to allow them to devote two years to the songs on the album. In any event the time spent has paid off. The lyrics are off in an involved way and the songs themselves have a punky-skronky asymmetry that makes for provocative listening.

Lead singer Teal Gardner has a way about her, perhaps slightly out-of-control in a deliberate fashion, just a hair, though. I mean a little off of the pitch in a purposeful way, do you get me? There's an in-your-face matter-of-factness going on with her also, along with a cool sort of yodel for a second now and again. It's rough and ready and appealing what she does here. The band--guitar, bass, drums--has worked out some garage-y thrash that has twists and turns far beyond the norm--avant surf, zombie riffing, just off-of-center weirdness in general...

I find myself not tired of this record and I am working on listen number five as I write. Now that says something about the music. It's unexpected and non-cliche, so that I am still getting much out of my earful at this point. If you are going to listen to indie-windy-whatever-wave we-are-on music, then respect yourself and glomm onto this, for one. And whatever else of course. But I do recommend the thrust of UUVVWWZ to rocket you out of boredom and into someplace else better.

The album is pressed in limited quantities and includes a CD copy in the jacket, which is a very good idea. But it wont be available forever so unless you want to go with a download you should grab one soon.

There is no guilty pleasure here. It's a very good go! I hope they keep it up, too. Now would I post this one on my classical or my jazz blog? Duh, no. That doesn't take away from the real and original thing happening with these folks. So hoist one and be of good cheer. Or just listen.

Posted by Grego Applegate Edwards at 1:02 AM