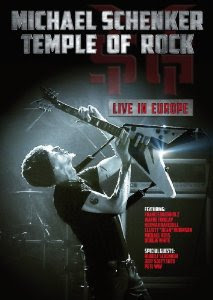 If you dig the Flying V metal pyrotechnics of guitarist Michael Schenker and his heavily claden band, Michael Schenker Temple of Rock Live in Europe (inakustic 6187 DVD) will give you plenty of it. There's one long concert live in Tilburg and a shorter segment live at the High Voltage Festival, in the Netherlands and London, respectively, 2012.

The sound is mostly great, the music full-out, the visuals make you want to go out and buy a Flying V or at least prance around your living room. Schenker has some hammering-on chops and a great sound; he and the band get some good riffs going too, as you'd expect. It was a tour supporting the Temple of Rock album, and they get heavily into the rocking-out presupposed for such a venture.

There's a 2-CD set of the music available as well, so it's your choice. Metal guitarists may well find this a must, if only to watch Schenker's fingers at work. Any metal head with aspirations to collect will cherish the disk(s) too. Nuff said!