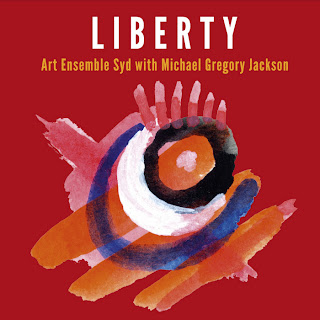 It's great to have Michael Gregory Jackson (aka Michael Gregory) on the scene. Great because he is a true poetic artist--a fine and uniquely original guitarist, composer, songwriter, vocalist and lyricist. We've had an important reissue lately, dug him with his own units and with Wadada Leo Smith, and now there's a new one with Art Ensemble Syd, called Liberty (Gateway Embla Music & Experience EME 1302).

He joins up with an out-of-the-ordinary group of musicians and it's a combination both original and enjoyable to hear. Michael of course is on electric (and acoustic) guitar and also sings a bit (more on that later). Then there is the acoustic bass of Niels Praestholm, the alto, soprano and flute of Simon Spang-Hanssen, the violin of Heine Steensen, the flutes of Thorstein Quebec Hemmet and Matias Wolf Andreasen on drums and percussion.

This is the music of Michael in its current incarnation--there is a rock component in spirit and matter, but it is both lyrical and uniquely outside in its expressive strength. And it is that in a way that is what Micheal Gregory Jackson is all about. This is a creative, sympathetic band with the kind of instrumentation that gives air and light to the music. It's multi-layered more than thickly heavy.

Michael gets some guitar-gem soloing here, some of his very best. His song "Down" is particularly haunting, with lyrics that reach out to your inner angst. It's a song for the miasma many of us feel at times, during the hard times of the last decade, and it transcends by its sheer beauty.

There's a new version of "Clarity 4" that sounds as beautiful today as when he first recorded it years ago. There are some pristine acoustic guitar imaginat-ings and there are some smart rock-funk adventures.

It's a mind-blowing disk, one of his best in years. Michael is in top form and Art Ensemble Syd is an excellent vehicle for the new sounds happening here! Many stars, many stars!