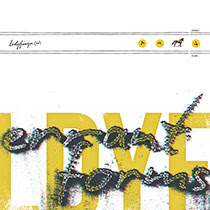 Today's post in a way is of a piece with yesterday's. We turn to another rather vital modern rock outfit, Ladyfinger (NE) and their third album to date, Errant Forms (Saddle Creek LBJ-177 LP/Digital). It is to be had as download or as a clear vinyl limited edition LP, the latter including a pair of 3-D glasses to view the cover with!

This is a band realizing a sublime sort of punk-classic rock maturity. The band drives hard with guitars and rhythm dominant, yet the songs, with notable vocals and lyrics both, have a subtlety that puts them in contemporary currency as not the typical rock group.

Like UUVVWWZ's second (reviewed yesterday), this Ladyfinger effort shows a musically drawn series of pictures that have been subject to some care. This grouping of new songs shows a bit more polish than the UUVVWWZ set, but both have power to spare. Both groups have given us some very first-rate songs to like. In both cases also the guitar-bass work has something much stronger and less cliche than some of what we hear these days and it has to do in part with the interesting structures the songs call up. There's a good deal to hear, ponder, grok on Errant Forms. Plenty to like!

And "like" I am doing with this one. Certainly one of the better "real" rock outfits playing today!

Posted by Grego Applegate Edwards at 12:32 AM