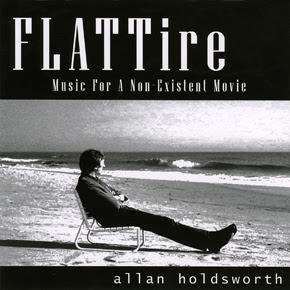 Everyone knows by now that Allan Holdsworth is one of the prime electric guitar innovators of our era. He is a sound innovator, with a beautiful violin-like tone. He plays solos that have harmonic and melodic implications that too put him in his own league of crafty one-man stylists, a line-and-chord innovator.

Allan recorded his 11th album in 2001: FLATTire, Music for a Non-Existent Movie. It's been unavailable for a while but now resurfaces, slightly remastered, sonically enhanced and available for all to hear on MoonJune (053). Here we get a chance to listen to Allan not so much as guitarist--he appears only very briefly with a conventional instrument--but as musical thinker, as harmonist, melodist, as both spontaneous and methodical composer.

That is because everything else on this disk is generated by Allan with his synthaxe (except two cuts that bring in Dave Carpenter on acoustic bass). The instrument enables Allan to play on a guitar fretboard with strings and such, but then have that signal act as a MIDI-controller. So you can activate keyboard-sounding synth notes and chords (as you play the guitar setup), but you can also do whatever else a MIDI-controller does, including generate and control electronic drum beats.

So this is an album of Allan as self-orchestra if you like. It is Allan as he thinks melodically, as he thinks harmonically, minus the guitar attack and tone.

That takes a little getting used to. But in the end, this is first-rate cosmic electro-music as only Allan could and might piece it together. It's very much Allan and so it's going to get you smiling and digging it if you appreciate who Allan is underneath those amazing guitar runs. They are still there anyway, but as synth runs.

It's not for everybody maybe. And who is everybody? But if you clear your head and just listen without expectations, it's a damned fine album! I am glad to have it and glad it is back.