Aram Bajakian, There Were Flowers Also in Hell 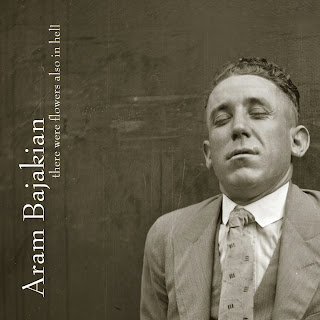 Aram Bajakian, skronkish post-surf fuzzball guitarist of advanced progressive noise and nice rocking returns (though in fact he hasn't left, really) with a trio effort that lays well on the speakers, called There Were Also Flowers in Hell (self-released I think, available at Bandcamp).

He is well seconded in his efforts by the power trio compadres Shahzad Ismaily on bass and Jerome Jennings, drums. Aram has played with John Zorn and Lou Reed but this is his music. Sometimes faux Stray Cats rockabilly-but-out sounds with a bit too much of the bennies is the order of the day (though no, we are not talking substance, just sound); there is a Baltic surf thing going on at times and some very metal hipness happening, too, sometimes all at once.

Aram has smarts in his guitar warp and woof. It's how the band plays the compositional things of his that makes it all come together. And there is not exactly that much I would care to compare it with as far as things happening synchronicitously out there.

Aram and company toggle between clean Fenderising and dirty fuzzing deftly. I grew up doing the same, at least with my ears, and the world-like influences make it even more interesting. You think for a minute you are about to hear Santo & Johnny's "Sleep Walk" or "Miserlou" by any number of surf bands but then no, hell no, it's something else altogether. But perhaps "Miserlou" isn't so very removed from this at times, not deep down. Except then it goes out and you know it is 2014 and New York plus far away places have come together, now, in interesting ways.

It's avant but rocking and tuneful stuff. I find it a very natural listen. I mean it just hits you like an organic thing. And it is fun! Try that on and see if it fits. I will bet it will.

He's got another new one so stay tuned.