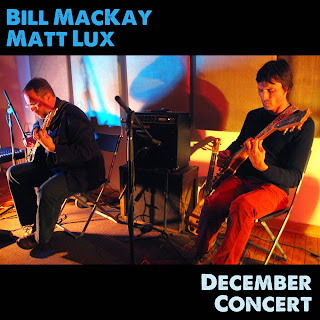 Though I no longer live in Chicago and have not for quite a while, I still follow and appreciate the vibrant jazz and blues scene that Chi-town embodies. Another example is before us today in an extended 30-minute EP of electric guitar and electric bass duets by Bill MacKay and Matt Lux, respectively, entitled December Concert (Ears & Eyes).

The music has a primality that loosely puts it in a sort of raga-rockish modality. They stay in a pitch-centered zone and develop compositional-improvisational moods and pulsations that have a retro-transformed appeal. MacKay comes up with inventive figures, both chordal and line-building aspects that are well seconded by Lux's electric bass. It sounds a little like what a psychedelic band might do in the classic era if the rest of the band dropped out for a half-hour. Of course that rarely happened if at all, but you have to imagine.

There is counterpoint and modal ingenuity to be heard here, all of which is pleasing. I would love to hear the two do something similar with drums and a second guitar or keys. Perhaps they will. But the openness of the duet format gives them leverage to go places that the presence of a full band might inhibit.

There is a refreshing change for one segment when Bill switches to the requinto, a smaller, higher pitched guitar used for traditional folk music in Spain and Mexico especially.

The open form format gives the two plenty of freedom and they take advantage by weaving webs of both latent and full-blown psychedelia.

It maintained my interest in an inventive way. If you are into the zoner free space that the Dead traditionally opened up often enough as part of their live shows, you will definitely resonate with this, I would think.