Pray for Brain, None of the Above 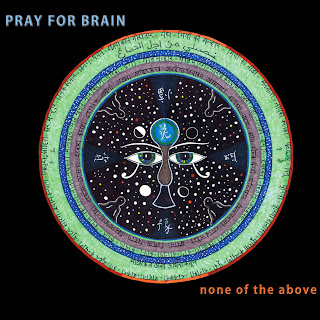 Not everything is obvious. Except that it isn't. When I put on the CD by the band Pray for Brain for the first time, I had no idea what to expect. What I got was NOT the obvious. I am speaking of the album None of the Above (7d Media 1412).

Well and so? So it is a trio in a rock-jazz-fusion mode. Guitar (and oud!) by Mustafa Stefan Dill, acoustic bass by Christine Nelson, drums by Jefferson Vorhees.

The band gets a sound that plays on Mideastern modes often, yet does it in a sometimes heavy, always smartly rocking way. These are originals that have metal, surf and avant fusion overtones, depending. The band seems to be based in New Mexico.

Mustafa Stefan has his very own way with the guitar (and oud!) that is technically adept but very lucid and original in a Mideastern minor mode that has rock heft when he choses to crank a bit--and a bit of the hang-ten surf sound down pat when he brings that on. He's very worth hearing. Christine plays the double bass with great tone and a nice sense. Jefferson drums with taste and heat.

The tunes, the band as a totality and Mustafa's signature guitar style all give you something different, something extra.

I must say that this one was a big, pleasing surprise. I don't know how far afield they gig, but if they happen to be in your town, check them out! The album, too! It's not the obvious and it is very good.