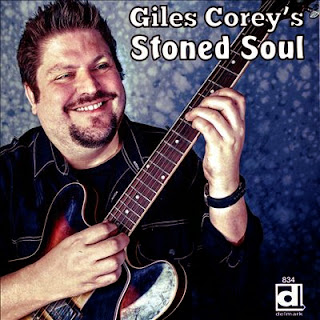 Leave it to Delmark to continue coming up with blues artists that have that something that makes them firmly in the tradition yet also of today.

Giles Corey is another. He's not exactly unknown, arriving in Chicago in 1993 and gigging with established blues cats while going to the University of Chicago. After he graduated, he did some touring gigs and wound up in the band of the legendary Otis Rush. After that he did a duo thing with drummer Rick King, Lubriphonic, which toured quite a bit and cut five albums between 2007-2011. When that outfit suspended its tenure, the stage was set for Giles Coury's Stoned Soul (Delmark 834). This is their debut album. The band includes Rick King and two game partners on bass and keys.

This incarnation features Giles highly electric guitar, sometimes in a slide mode that owes something to the late Johnny Winters, other times it's flat-out juiced blues-rock. The music has that contemporary soul-blues nexus and Giles sings with the grits and gravy one would expect.

The album is a mix of good originals and a couple of covers. This is a band with presence, Giles out front on guitar when called upon, the band getting soul-funk grooves going throughout.