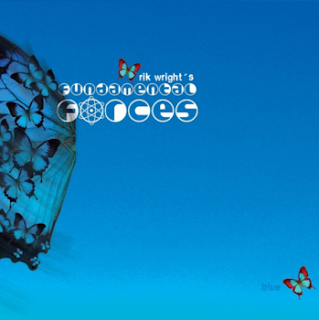 Wright plays a spacey electric guitar that combines perhaps a shade of early Abercrombie with some fairly psychedelic jazz sensibilities. He is joined by a pretty hard hitting rhythm team of Geoff Harper on bass and Greg Campbell on drums. James Dejoie adds much on reeds (alto, bass clarinet, clarinet, flute).

What is especially striking to me is the use of space. There is enough of it that you get a feel of being situated, of having space parcelled out for you like the zones between planets--so that every note has an enveloped feel, a poignancy, yet there is still lots of drive and heft to the music.

This has a jazz-rock thrust to it throughout. It is grooving and outward bound but not thickly dense. That sets it apart along of course with the what of the notes themselves, often bluesy-diatonic-pentatonic poems that remind a little of what the jamming rock bands did in the early days, but more evolved and consistent.

Everybody has a role to play and they do it well. Rik stands out as a pretty electric force, an original sound vehicle that can crank but knows how space and dynamics can make lots of difference in the sound of his playing and of the unit as a whole.