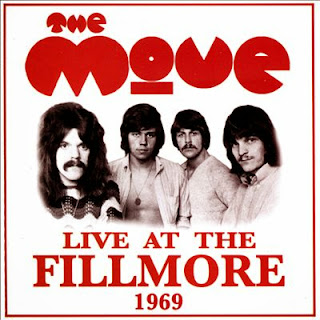 The Move was a British band that had some FM hits over here in the states, likable things like "Hello Susie". I heard them and they fit in with what the later psych and song bands were up to in the era. But for whatever reason I never checked out their albums and when they faded I didn't really notice.

Now we have a two-CD set of the band going on at some length, in person. Live at the Fillmore 1969 (Right Recordings 116 2-CDs) gives us 100 minutes of the band in quite decent sound, considering, making their first and only US tour. By 1969 they had had a few lineup changes but the late Carl Wayne was still doing the lead vocals. Roy Wood is very present on lead guitar. The band sounds tight yet loose.

I didn't know what to expect from this, their only decent live recording. Turns out it is a pleasant surprise. They do good versions of "Hello Susy" and "I Can Hear the Grass Grow" but also some choice covers that differ from the originals enough that we have something different going for them--Ars Nova's "Fields of People", the Nazz's "Open My Eyes" and "Under the Ice", the Byrds' "Going Back" and others, all with something to offer them.

It's very much a period piece, as you can imagine. Yet the band had musicality to them and come through with some very groovy music that epitomises the era yet manages to sound fresh, too.