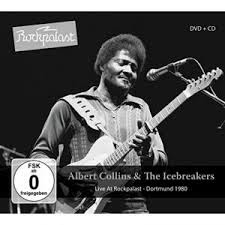 Albert Collins was a blues guitarist of originality and stature, a vocalist with plenty of soul, an artist with a vibrant blues totality that marked him as one of the finest bluesmen of his generation. He may be gone but he lives on in his music. A fine live 90 minute appearance with a solid band greets and moves us on the recent 2-CD/1-DVD set Albert Collins & The Icebreakers Live at Rockpalast - Dortmund 1980 (MIG 90632).

It's a strong backing quartet centered around tenor and singer A. C. Reed, and Albert in fine form with his electrifying vocals, the signature neck-position humbucker Telecaster, the capo, and Albert weaving his pickless blues spells as only he could do. It is instructive and fun seeing his playing in full visual glory. The body language of his live show reminds you how much his vocal and guitar style were GESTURAL, leaving space and heightening tension almost conversationally. He is on it instrumentally and vocally for this German TV live series and we feel like we are there with very decent sound and crisp visuals.

They run through a long set and we get the full aura of Albert live. This one is a boon for blues guitar fans! Check it out by all means!