Scorpions, Forever And A Day, A Documentary by Katja Von Garnier, DVD 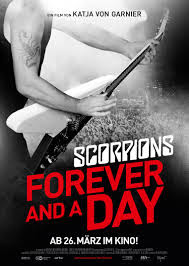 Rock and roll is here to stay? It certainly seemed so when I was young. Nowadays rock as the common denominator pop music of the world is perhaps something that is fading. But then the "Top 40" itself is no longer what it once was, a set of songs, most of which the entire community had in their ears and would recognize as a big part of being alive then. Top 40 now appeals to a smaller and smaller margin of people, and there is no universal recognition out there, no one set of songs the world is singing along to. The burgeoning of all kinds of alternatives, musical or otherwise, has eroded into the once dominant form of music dissemination that top 40 AM stations enjoyed. There is less and less rock on those playlists, but then there is less people listening to and buying those songs, for better or worse.

All this a prelude to a documentary on the Scorpions, Germany's long-lived heavy metal-hard rock-power pop group that has existed from 1965 until now, selling multi-millions of albums/singles and at their peak one of the most ubiquitous of the arena rock stars. Katja von Garnier's film Forever and A Day (MVD Visual 7956D) tells that story, currently out as a DVD in German with English and French subtitles.

Now I must say that the subtitles are not the best. My partner and I had trouble reading them--they are small, and our eyesight is far from perfect these days, but the typeface and color of the subtitles in any event make them hard to read, especially if the color of the images underneath them is lighter, close to that of the typeface. Since 90% or so of the dialogs are in German it made the comprehension a little rough. If you have one of those big-ass widescreen TVs (we don't) and you have 20-20 vision this may not be a big deal, or of course if you are fluent in German.

That being said, the premise of the documentary is that the band, after all these years, decides it is time to retire. They go on an extensive farewell tour throughout the world and as they do the band members look back at their career. The footage of early live tours and early interviews, etc., spice up the narrative along with a good deal of their own home video-movies.

The beauty of the band at their peak, the guitar work, and the love between audiences and band all make for a moving experience. Many music videos and stagey live appearance footage you see often today attempt to imitate the arena rock vibe that the Scorpions really did have and perhaps still do. But the rapture of the youth rock world at encountering a band and music they fully love is really there to see on this documentary, and I can only say that it captures something very special and does it dramatically. Now this all was big business of course but that does not guarantee that audience and musicians would commune together to the extent that is clear on this documentary.

Scorpion fans will love this. Whether the more casually acquainted music aficionado will or not depends on how much of the subtitles you can read. There is the drama of the aging musicians and their sadness at the eventual end of the road, the end of something that they clearly love, that is the all-in-all of their lives, something they are fully loved in turn for. Sad but moving. What are they saying? I missed a lot of that....