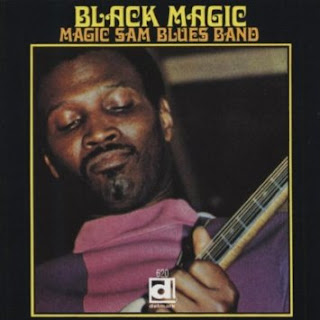 Chicago's Magic Sam was one of the most original voices and guitarists in the soul blues revolution that hit fully by the late '60s. He recorded two albums on Delmark and captured the loyalty of local audiences in the clubs. He was on the verge of national popularity when the Black Magic album hit the streets. He had a Stax record contract in hand and all was about to fall in place when he died unexpectedly at age 32 on December 1, 1969. That finished it all but his legend lives on today, principally via the two glorious studio albums he recorded for Delmark.

The second and last record, Black Magic (Delmark DE 620) is now available in a new Deluxe Edition with eight additional tracks and alternatives (two totally unreleased until now, five appearing originally on The Magic Sam Legacy). The edition includes a new 16-page booklet with additional liner notes and photos from the studio.

The ultimate package is an essential item in anyone's blues collection. It has all the hallmarks of Magic Sam's inimitable vocal style, his guitar rootedness seconded by Mighty Joe Young, and a crack Magic Sam Blues Band that is out to capture your soul.

The original album is all there, of course, Sam's timeless vocals and west side Chicago electricity. The full edition gives you nearly 70 minutes of music, the legend at a peak. The sound is all at Delmark standards and in the end, the promise of Sam's brilliance is all there to hear, fulfilled!

A terrific one to have! A blues must!

Posted by Grego Applegate Edwards at 5:51 AM