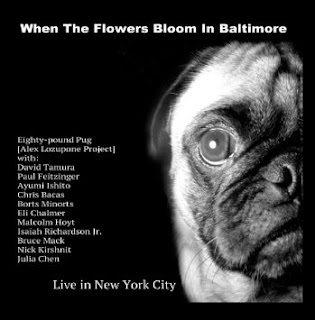 Guitarist-leader-composer-conceptualist Alex Lozupone and his Eighty-Pound Pug project has been the subject of a review here about a month ago. Today another quite interesting album from him and Pug, When Flowers Bloom in Baltimore (self-released). It features a rather larger band live in New York City. The combined personnel is:

As before the backbone of the sound is Alex's metallic guitar riff-motives and free spacing moments. The rhythm section rocks loosely and the large contingent of horns has space to enter in freely and avantly. Bruce Mack's vocals (and Malcolm Hoyt's "death vocals") add an important element to the mix. Bruce Mack sounds like an evolved extension of Jack Bruce's vocal ways.

We get a full set of numbers that bring out the 80-Pound Pug sound in its full complexitity. It is a successful melding of extreme metal and free jazz, I suppose you could (and should) say.

The music comes together consistently for a fully outside brashness that after a few listens I have come to appreciate. There is nothing quite like it. The question for you is will you hear these confluences of avantness with an open mind? Both hard rock and avant jazz folks will find commonalities here if they are willing to give this noisy onslaught their sympathetic attention.

I must say that I am a convert, much as the first listen puzzled me. It hangs together as something without compromise, and uniquely insistent. Ultimately it convinced me as very worthy sound. Let your expectations go out the window and you may well find yourself digging this.