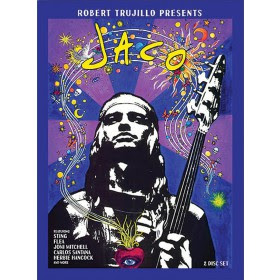 Jaco Pastorius was undoubtedly the greatest electric bass guitar player we have yet to know. He skyrocketed to world renown for the brilliantly innovative sound he got from his fretless Fender Jazz Bass, he had an outstanding technical grasp of the possibilities the instrument could yield, and perhaps most importantly was a complete artist whose solo and accompanying styles made for some wonderful music no matter what the context.

The film documentary Jaco, now released as a 2-DVD set (Iron Horse/MVD Visual JO1002), gives us some great insights into the artist, his growth into an instrumental giant, his complex personality and ultimately his sad end. The film benefits greatly from the cooperation and involvement of Jaco Pastorius IV, Jaco's son, and so has a good deal of home movies made at all stages of Jaco's life, and then gives us some excellent interview segments by principal players in the drama and its unfolding, including Wayne Shorter, Joni Mitchell, and other key associates who came to know him well. Disk One covers the entire film in 5:1 sound; Disk Two has lots of detailed interviews presented more-or-less in their entirety.

The documentary is generously spiced by some significant footage of Jaco in performance with Weather Report, his own band and with Joni Mitchell, including a rather incredible solo spot where Jaco sets up an irresistible groove via digital delay and then proceeds to give us some vintage Hendrix on outside bass. Then too we get segments of appreciation by other electric bassists and how he impacted the bass scene--so there is Sting, Bootsy Collins, etc.

What perhaps is most striking is how his quixotic personality is captured. Here was a complicated person whose brilliance was as much a cause for his own suffering as it was for a time triumphant. His skyrocketing to fame in the caustically excessive life style of '70s rock stars increasingly put pressure on him to realize big record label commercial success as at the same time he fell into a pattern of overindulgences. The high life and the pressure for more and more success was a recipe for disaster, and the bipolar condition that came to the forefront at his peak took a terrible toll. The last period of his life is vividly captured in harrowing ways and his final end breaks your heart.

The high-stakes world of the music business then was decidedly NOT a good environment for someone who in the end was much more fragile than he may have appeared. His creative forces were ultimately sapped. He became dysfunctional, his own worst enemy. Who might have saved him from his fate? The movie ends and you wonder if he might have gotten more help from those that were most a part of his life? I have no answer, for the complexities that were Jaco made him at the end difficult to reach.

This is a bio that gives you Jaco in all his triumph and in all his destructiveness. Its emphasis, perhaps understandably, is on the period of greatest fame; there is less attention to the bonafide jazz cred he established in his work with Paul Bley, Pat Metheny and such in that first period of flourishing. And in the end it is Jaco the fallen star that we see most clearly. One documentary cannot be all things, of course, and the wealth of biographic documentation, the unique person of brilliance and tragic burnout that is captured in ways you will not soon forget, that is what you are left with most poignantly. And after all, if it generates interest in the audience to explore the full discography of the master bassist, so much the better.

It is one of the best bio-documentaries I have seen on somebody from the '70s realm. It reminds you of some of the great music that was being made during the era, and positions Jaco as an important force within that scene. It gives you a heart-breaking look at a brilliant creator who was not suited for the pressures of stardom that were so volatile in those days. And it reminds you why Jaco's legacy is still key today. It will rivet you to your seat!