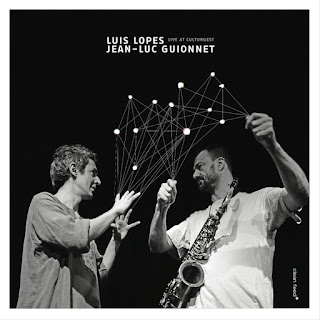 I have been digging Portuguese electric guitarist Luis Lopes for a while now (check the index search box for earlier reviews). So I perked up when I received his duo appearance with alto saxman Jean-Luc Guionnet from 2011, Live at Culturgest (Clean Feed 352).

It's the two of them going out there for two extended improvisations. They take no prisoners, as the saying goes, but instead hunker down to explore avant expression at some length.

Luis is a master of extreme avant noise electricity. Jean-Luc gets torque from his alto with some vibrant extreme expressions of his own. The two meld together for long-toned feedback-laced beginnings, then launch into free-flowing turbulence of the most bracing sort.

This kind of duo is no easy feat. They have total freedom and they are completely exposed with no reliance on a rhythm section to carry them through. It's just the two and an audience expecting something great.

The good news of course is that they come through admirably. Luis achieves a rolling percussiveness of tone-noise that has cohesiveness. Jean-Luc splits his alto tone, screams, cajoles, and sound-sculpts his way through the first half of the set. Part II finds them beginning with a quieter, sparser ambiance that excels in the give-and-take of out phrasings. All gradually builds into another turbulent climax, more note oriented in this section at times and quite notable for the maintenance of outside coherence, stylistic unity and creative, effective dual musical decision making.

This may take some getting used to for those who do not normally dwell on the fringes of modern improv. Those who know the ultra-extreme genre will appreciate the high creativity that the set exemplifies. Others may need to make an effort to get this, with multiple hearings. Either way though Lopes and Guionnet give us some dramatic, tensile strength that will exhilarate if you give it half a chance.