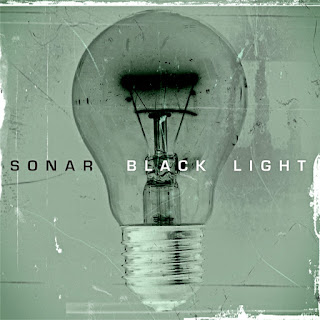 I am not one to tell people what to listen to, though of course my aim is always to persuade gently. For the album at hand I am tempted to tell you to drop everything and just order it now! That does not make for interesting reading, nor is it a good way to convince anyone.

So instead I will tell you that the Swiss group Sonar is into very good things on their recent album Black Light (Cuneiform Rune 413 CD or 2xLP). It is not their first album. I covered their Static Motion album here on May 7th of 2014, and dug it. There have been a few others before that but for now what matters is this new one.

Black Light is a mesmerizing, motorizing post-Afro, post-minimal, post-Crimsonian-Frippian trip into the contrapuntal, intricate, very rocking sound of two guitars, electric bass and drums getting into interlocking hockette. (OK, so you wont find that term on many guitar-oriented blogs. It merely means multi-voiced music with interlocking short-lengthed phrases working together.) The Mbuti did and do this in their own way, as did Medieval Europe. Sonar does it with the electricity of rock and the rocking intensity of irresistible rhythmic drive.

Bassist Christian Kuntner and drummer Manuel Pasquinelli make up the "rhythm section," though rhythm is prominent on the two guitar parts as well. Stephan Thelin is the main composer and one of the two electric guitarists. Bernhard Wagner is the other.

Together they embody a super-minimimal groove music that combines everything from surf to, as Thelin remarks on my press sheet, "Lark's Tongues in Aspic, Part Two." Well and so you might hear echoes of Fripp's League of Crafty Guitarists or, duh, Terry Riley and Steve Reich.

What matters is how good this music is, how well all four conjoin to create really exciting electro-hockette. Jackson Pollock meets Duane Eddy? That's a title of one of the numbers and it may give you a further idea of what you'll hear.

This is music that will grab you right away and you will forget whatever labels you might give it. It is superior and undeniable! It puts you in a zone and keeps you there. Put some time in with this band, especially with Black Light. I do not jest, you will go to a great place.