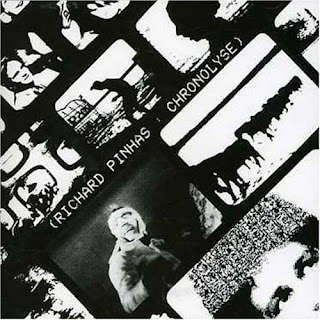 What we have on hand today is the first vinyl reissue of Richard Pinhas's Chronolyse (Cuneiform). The analog synthesizer music based on "Dune" and its companion side of the 30-minute drone panorama of mellotron, guitar, bass and drums first came out in 1978 and though it shows all the elements of the advanced music of the era, it remains distinct, exciting and contemporary to my ears.

The Riley-Reich minimalist cosmos reflects itself in the hands of Pinhas, especially on the first part of the album. Yet there is an avant rock heft to it as well and an original feel to it all with its well-staged, elaborately conceived space-futurist presence.

The electric band of Pinhas on guitar, Didier Batard on bass and Francois Auger on drums deftly expand the music on side two with a cosmic jam overtop electronic drone tracks. It is an advanced music with lots of room for Pinhas on nicely post-Frippian guitar and an eventful cosmology of admirable spaciness.

I missed this one when It came out but I am very happy to make its acquaintance now. It shows us a Pinhas fully on the road he has traveled so productively, a major way-station in his musical development that compares favorably with any of the incipient psyche-trance music that was made at the time.