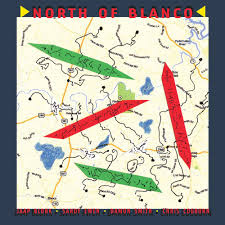 From the rich cache of recent albums steered into musical port by eminently capable helmsman, bassist Damon Smith, I put forward yet another interesting offering for your consideration, North of Blanco (bpa 016). It is a free, extended timbred improvisational quartet that strikes musical gold with six shorter to more extended segments.

In this foursome are Jaap Blonk on vocals and electronics, Sandy Ewen on guitar and objects, Chris Cogburn on percussion and Damon on prepared double bass.

The emphasis with this outing is to realize advanced sonic sculpting, to create textures and ambiant universes that rely on the creative instincts of all four participants to create extra-musical sounds from, if you will pardon the overused phrase, "outside the box."

That means that Jaap Blonk lets loose with considered vocalizations from within the realms of human capabilities, not just "singing" as such but phonemic percussives, unpitched and pitched utterances and otherwise choosing from the full gamut of soundings available to him as human exponent.

Damon's prepared bass, whether bowed, plucked, scraped or sounded in whatever way necessary, creates an extended universe of textures and timbres that complement Jaap and his effusions.

The same can be said of the distinctive soundings of guitarist Sandy Ewen (who we covered recently with a duet album with Henry Kaiser) and percussionist Chris Cogburn.

The result is an iconoclastic mix of noise-pitch freedom that all who like the outer realms will no doubt readily respond to as I have. Beautiful sounds of deep listening and measured utterance!

Posted by Grego Applegate Edwards at 10:01 AM