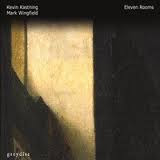 The days when you could say to yourself, "oh, I think I know what this sounds like" may still be with us, but it seems to me less and less so. I get a fair amount of music that I cannot say I have any intuitions about, and then others where I know the artists well enough to have a good idea. The latest album by Kevin Kastning and Mark Wingfield, Eleven Rooms (Greydisc 3528) was one of those "huh?" albums. But then when I put it on something wonderful, I mean pretty darned wonderful came out of the speakers.

It is an introspected, open-formed series of duets with Kevin Kastning on 36-string double contraguitar(!), 30-string contra-alto guitar, classical guitar and mandolin plus Mark Wingfield on electric guitar.

The combination is pretty unearthly. The 30- and 36-string guitars sound incredible, almost harp-like and Mark's electric guitar has a wonderful electric tone and noting way about it that makes him a standout player.

This is their fifth album, and it is a winner. The multi-string guitars (which Kastning invented) lay a luminous, musically distinctive backdrop (as does the classical guitar and mandolin) overtop which Wingfield crafts some wonderful ambient electric guitar lines, which are in the tradition of the ambient guitarists we know and love, yet there is a special tone he gets that distinguishes him and what he plays is marvelously musical and original.

The two together make a magic blend that takes you elsewhere in a sort of post-ECM neo-psychedelic space, but not in a predictable way. Each has a musical vision that when combined make for music you've never heard quite like this before.

It is a beautiful experience and a set of musical inventions that intrigue and keep your attention fixed at the foreground. It may be "mellow" at times, but never without real musical content. Very recommended!