Alvin Queen and Some Significant Others 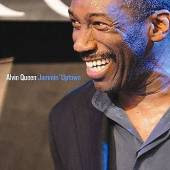 February 5, 2009—The world of freewheeling hard bop remains alive today. Sometimes the blazing hell-for-leather onslaught of the best moments can be missing from some of today’s sessions. That’s a pity.

However, the Alvin Queen CD on tap this morning has plenty of the intensity of the classic dates. Queen is a very good drummer who has played with all sorts of people and the CD Jammin' Uptown (Just A Memory) is graced by the presence of some of the very best on the contemporary scene. The now deceased John Hicks mans the piano, Terence Blanchard is on trumpet, Robin Eubanks on trombone, Ray Drummond on bass, and the under-heralded Manny Boyd is on reeds. This music was originally released in 1985 and has been reissued with bonus material.

What you get are nicely turned blowing vehicles and some very nice contributions from all at hand. If you like the classic Art Blakey Jazz Messengers line-ups this will certainly appeal to you. You might find yourself shouting “go” like you were sitting at a table in the Birdland club, 1955.
Posted by Grego Applegate Edwards at 6:15 AM