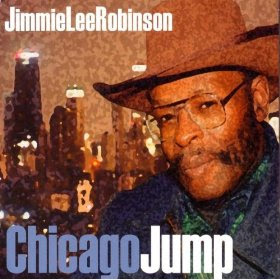 February 13, 2009—The blues keep on playing a pivotal role in the American musical heritage as we experience it today. Much of the music out there presupposes its existence. Chicago has of course been an important, central city for its development, mainly for wave after wave of the urban, electric style that has been so influential.

Today we look at one of the lesser known electric blues heroes from Chicagoland, Jimmie Lee Robinson. He was Little Walter’s guitarist in the ‘50s and gigged around before making a comeback in the ‘90s. The CD we’re looking at today, Chicago Jump (Random Chance), was recorded during that later period but languished on the shelf until recently. Jimmie passed away in 2002 and so the CD is a kind of posthumous tribute. It’s a straightforward date with a small electric outfit doing songs in the tradition of the Chicago sound. Now Jimmie Lee was no B.B or Buddy Guy, but he was decent and in the tradition. And his vocals had a nice soulful attack. Perhaps this CD will not be nominated as one of the 100 best blues recordings of the 20th century but it is solid, real, engaging and direct. The best of the blues is like that.
Posted by Grego Applegate Edwards at 5:46 AM