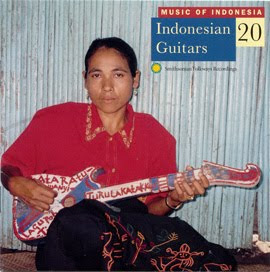 When one thinks of Indonesia, guitar playing is not necessarily the first thing that comes to mind. Yet the country has its rock bands, pop groups and some good jazz guitarists, some of which we have and will be covering on these pages in the future.

Today, though, a fascinating volume in the Folkways Music of Indonesia Series. Volume 20: Indonesian Guitars gives you seventy-odd minutes of what is on the local, folk music level, as opposed to more nationally distributed styles.

The form taken is about half the time a solo acoustic guitar/singer in a style that is an equivalent to some of the traditional country blues music of 20th Century US. But no, of course it sounds Indonesian. There is clearly a relationship of some of this music to the traditional lute playing of earlier times, and the melodic modes certainly have deep roots in traditional musics of local Indonesia.

There are surprises, like Band Teleu Nekaf, who use flute, acoustic guitar and slide electric guitar to create what sounds like a hybrid of Sundanese and Hawaiian music. All of it is quite interesting. Some of it is not like anything I have ever heard before. I must say this one is heartily recommended if you are up for a musical adventure.

The album is available as CD or download from Smithsonian Folkways and includes the usual meticulous notes for which Folkways is known. Google them to find out more.
Posted by Grego Applegate Edwards at 4:01 AM