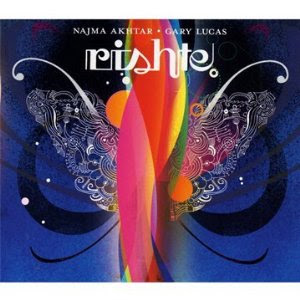 Stylistic meldings of South Asian and "Western" musical styles have led to some extraordinary sounds over the years and anyone who has listened deeply to the adventurous side of music since the '60s will surely need no prompting on my part as to the various breakthrough performances and recordings.

When guitarist Gary Lucas involves himself with such a project, one approaches the results with high expectations. And happily one is not disappointed.

Vocalist Najma Akhtar grew up in England but is of South Asian ancestry. She is a vocalist of nuance and great musicality. For this album Ms. Akhtar composed and adapted vocal lines while Mr. Lucas created guitar universes to compliment those vocals. Tablas, and sometimes classical Indian violin are the additional musical voices. The album is called Rishte (World Village).

With Gary Lucas of course, you can get wonderfully lively acoustic guitar music or the more electric and sometimes more orchestral guitar playing for which he is known. Here you get both.

If jazz is, as the famous quote goes, "the sound of surprise," Rishte is more like the sound of astonishment, or can be if you make some exclamation in the midst of the first listen.

There's the blues-rock riff electricity with contrasting Akhtar on "Woh Dhin." There's the lovely acoustic guitar blues of "Special Rider" and some truly different vocal approaches from Najma; and there's my favorite, the psychedelic orchestral shredding with memorable vocal line on "Soul Taker."

In other words the collaboration is a total success. There is a most definite melding of two (actually more than two) stylistic universes: South Asian classical, pop, devotional sounds with blues-rock-folk of American tradition (and as always with Gary, there's "something else" always going on there that does not easily classify).

If I said this was a "triumph" I don't believe I would be exaggerating on the side of hype. It is. A triumph, that is. As the late Lester Bowie once said, "it depends on what you know." It does.
Posted by Grego Applegate Edwards at 4:33 AM