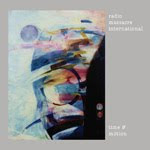 There are musicians and bands that I don't get the chance to hear until someone is kind enough to send me one of their recordings. Such was the case with Radio Massacre International, a guitar-bass-drums-electronics unit that has a new 2-CD release, Time & Motion (Cuneiform). In many cases, such as this one, I am grateful for having the chance to be exposed to what they are doing. This is an aurally advanced unit that alternates between beatless and highly evocative electronic soundscapes and a sort of space rock jamming that is equally evocative.

The two-disk format gives the group plenty of room to stretch out and they do that exceedingly well. It enables them to wind out long tapestries of sound that end only when the statement they are trying to make has been fully articulated.

I like the band in the forward moving, pulsating mode but the entire presentation is about loosening the bonds to timefullness and then framing that with its grooved opposite. All three musicians play thoughtfully. They do not overplay but trust in their mutual musical objectives and the evocation at hand. The result is not a "wow, these guys have super chops," but instead, "hey, what interesting music they make!"

Guitarist Gary Houghton really gets off some nice sound sculpture sorts of solos. At times the band forms the current equivalent of middle-period Pink Floyd in the jamming, instrumental mode. Not in terms of a direct influence but rather in their epic approach to narrative space rocking.

It's not the sort of music you should be in a rush to grasp. They take their time and you must surrender to their presence to get on their wave length. Once you do that you are in for some very interesting and exhilarating sounds.

Based on this recording I would put Radio Massacre International in the top handful of current bands playing in this mode. In their own way, they belong up there with groups like Ozric Tentacles, and Robert Fripp and some of the offshoot Crimson related units, to mention only a few.

Good show!
Posted by Grego Applegate Edwards at 4:20 AM