Joanna Newsom and Her Voice, Her Harp 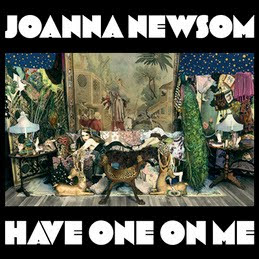 When I first heard Joanna Newsom on one of her earlier albums, she hit me like the proverbial ton of bricks. The Milk-Eyed Mender was pretty much her, her unusual voice and wonderful harp playing. Her voice sounded like she was much much younger than she was, but it was completely distinctive. The harp? Very nice. And she wrote songs that had whimsy and substance at the same time.

From what I understand, she developed a condition in her vocal cords that needed attention and she was forced to stop singing for some time. She is, happy to say, back with a slightly changed voice (it no longer sounds as young) and with her creative powers at a razor-keen sharpness.

She has a new 3-CD (or LP or download) box set of her songs, Have One on Me (Drag City). It has a classic quality. I mean she addresses the song form as art, not pop. In that she is like Joni Mitchell at her best. And like Joni, her music is intensely personal and romantic in that widest sense. There the similarities end.

The box set gives you a big helping of Joanna's songs, her harp, sometimes her piano playing, and sensitive story-weaving. Ryan Francesconi put together the arrangements and they are very appropriate. Strings and such are there as needed, nicely voiced, sparse, never intruding, never too dense to obscure that Newsom vocal and instrumental charm.

She is beyond classification. Singer-songwriter? Yes. Alternative rock or something? I guess. But what she does is art song for today, if I would venture to say (which I obviously would, since I just did!) There is nothing like Joanna Newsom out there. It is music to live with happily. But it isn't what anybody else is doing. No, not Norah Jones. Joanna Newsom.

The box set is available at a terrific price. Google her and you'll find it straight off. I recommend it completely. Some terrific songs can be yours. This is real musical talent!
Posted by Grego Applegate Edwards at 4:23 AM