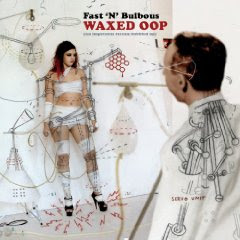 Gary Lucas, a guitarist's guitarist, whether adapting an unlikely tune to a Delta blues slide or in a full-tilt electric shred zone....Phillip Johnston, piquant alto saxist and another bold iconoclast, the founder of the acclaimed Microscopic Septet....Fast 'N' Bulbous, the band Gary and Phillip put together to do some new arrangements of the music of Captain Beefheart. This is a potent combo, not the least because Gary did an important stint in Beefheart's band, but also because Beefheart's considerable music lends itself to open-ended interpretations. And that's what you get. Freshly minted Beefheart, so to say.

The latest album, Waxed OOP (Cuneiform) is a lively, rocking, exciting blend of very hip Lucas, excellent mid-sized band arrangements and some gems of the Beefheart repertoire, and not just the well-known songs either.

Beefheart was and is a complex, multifaceted artist. He extended the blues into zones no one would have expected them to go, he was a prolifically bizarre wordsmith magician, and he wrote some amazing music for his various bands, stretching the envelop as to how a typical rock-blues aggregation (or not so typical, sometimes) could take on complex and unprecedented interactions. Listen to a little Trout Mask Replica, for example, and you'll hear guitars, bass and drums do things that nobody thought they were supposed to do back then. And we're not even beginning to talk about his vocals! That's for another time.

Waxed OOP gives you another look at Beefheart the composer, the forthright and worthy arrangements of Johnston and others, and some great Lucas guitar, unaccompanied here and there and in full-bloom in the ensemble.

"Well," originally a vocal solo, bursts into a flowering full-band sound. "Blabber'n' Smoke" reminds you how many great songs Beefheart could toss off almost casually in his peak years and how good they still sound, especially with some fresh arrangements. "Woe-is-uh-Me-Bop" is another gem, from the extraordinarily innovative album Lick My Decals Off Baby and it has new life in this rendition.

If you love Gary's playing, Johnston's concepts and arranging and/or Beefheart and his music, or you just wonder about any or all three, you cannot go wrong with Waxed OOP.
Posted by Grego Applegate Edwards at 4:42 AM