Coyote Poets of the Universe Return with "Pandora's Box" 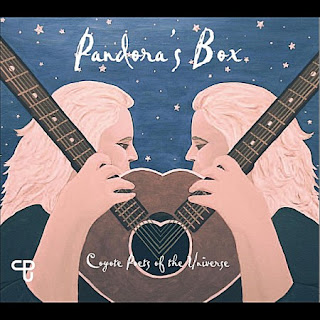 The Colorado outfit Coyote Poets of the Universe do a kind of Gypsy-folk-prog that at this point reminds me of It's A Beautiful Day, updated and refreshed for a new age I suppose, but not insubstantially or by resorting to ear-candy fare. The Poets have a lively nine-person outfit that includes violin, reeds, ethnopercussion and a female & male lead singer tag team, along with the various all and sundry instruments you might expect such a band to include.

Pandora's Box (Square Shaped Records 0105) is their fifth album. The last one, reviewed on these pages, I found quite interesting on an instrumental level. My only problem with it was that the songs themselves were not as well developed as I would have liked to hear. Pandora's Box is vastly improved in that way. It still has some rough edges--in the male vocals perhaps the most so--but it isn't supposed to be slick and it wouldn't work if it was. This is a kind of DIY outfit that has a sound more home-grown than formally schooled per se.

Their combination of retro-psych-folk and post-world is at its strongest on this one. There is a good amount of variety and the quirkiness of the band hangs together well this time. If you have a penchant for off-beat neo-folk, I think this one will do it for you. A good effort.
Posted by Grego Applegate Edwards at 4:27 AM