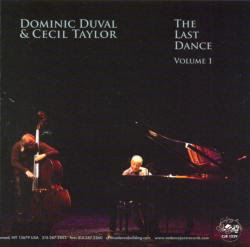 Cecil Taylor has played with some great bassists throughout his long career: Alan Silva, William Parker, to name a few. Yet unless I am wrong he never recorded a lengthy series of duets with any of them until the recently released The Last Dance, Volumes One and Two (Cadence Jazz 1229-1230). This is an entire live concert of Cecil with one of the masters of the contrabass, Dominic Duval. It came about when the producer of a documentary of Cecil and his music (All the Notes) came to realize he was in need of more performance footage for the final version. A concert gig in California resulted, from which the documentary pulled several minutes. The Last Dance gives you the whole of it, 70 minutes on disk one and the final 25 minutes on disk two.

As Dominic states on his lucid liners, the duet is a special one in that Duval's bass playing directly engages Cecil's whirlwind-then-calm-then-whirlwind treatment of melodic cells. There is an inspired two-way interaction going on, which perhaps the duet situation makes especially possible. Cecil's particularly fertile inventive imagination is at a high point for this concert and Dominic unleashes his very considerable arsenal of musical imaging and technical prowess to match and engage Cecil at the note-phrase level. Now that is just a sentence. If you hear the results it will take you far out of the realm of language and into a very special world that transcends the vocabulary available in a short review such as this. This is musical language, a musical conversation on the highest improvisational level. A few paragraphs do not begin to do it justice.

I probably don't need to state the obvious--that Cecil Taylor's improvising in the last 20 or 30 years has catapulted him to a place very few attain. His style-technique has matured and his imagination has soared to the point where he is, at nearly any given moment, a veritable dynamo of musical creation. And one part of that that seems to me especially remarkable is that he doesn't tend to repeat himself. Sure there are key motifs he may return to now and then, but the rest has the tabula rasa excitement of truly free playing at its most extraordinary.

And through this long concert Dominic operates on the same plane.

This is indispensable Cecil, indispensable Dominic, indispensable avant jazz, a landmark among landmarks. So I suppose you can tell I like it? Seriously this is a disk you could spend 20 years listening to (no doubt I will) and there will still be something in it for your ears to absorb anew. Very much recommended. Oh, you can get more info on grabbing a copy of this set by clicking on the CIMP Records link on this blog page, then navigating over to the Cadence Jazz Records section.
Posted by Grego Applegate Edwards at 6:42 AM